Why Aren’t These Artists On Your Spotify Playlist?

You’re probably reading this on your phone.  If you’re on a laptop, your pixel-screened companion probably isn’t far away.  Do me a favour.  Pick it up.  Go to Spotify, or whatever other music streaming app you use.  Check your playlists.  Your most-played songs.  What’s on there?

Let me guess: whether you’re into sticky-sweet bubblegum pop or soft rock or hard-edged drill rap, most of your favourite artists are American.  Maybe you’ve got a couple of UK talents, or those few lucky Aussies who’ve managed to claw their way onto the Billboard charts.

But, on the whole, your Apple AirPods vibrate with Americanisms.  American accents, American slang, American culture, American experiences.  Our musical world is LA and NYC, the streets of Chicago and the music halls of Nashville.

And that’s a shame, because, as great as American music is, there’s so much amazing talent right here in Australia.  I’m not talking about Kylie Minogue or Keith Urban – I’m talking about fresh, raw voices springing up out of Brisbane and the Gold Coast and the towns of Far North Queensland, bringing life to stories that are actually relatable.  Australian stories.  Our stories.  Our up-and-coming artists are injecting the Aussie music scene with the unique perspectives that we need, which is why events like the Queensland Music Awards are so important.

The QMAs are self-described as:

So here’s my second challenge to you: click this link here (it opens in a new tab).  Have a quick scroll through the QMA finalists for 2020.  Are any of them on your Spotify playlists?  Have you ever listened to any of these artists?

Or perhaps you prefer country – Hayley Marsten hits all the right notes in ‘Wendy’, a more sombre country-pop ballad that has the makings of a radio hit.

I could go on.  There are dozens of fantastic artists nominated this year, each with fresh sounds and a beautifully original offering.  Blues, jazz, EDM, heavy metal – every genre’s represented.

At this point, you’re probably wondering what this eclectic line-up of artistic talent has to do with Wyndham and travelling.  Music’s nice, but how does it relate to holidays?

Look at finalists, and the competition gets even hotter.

1. ‘Older Then’ by Luke Daniel Peacock

If you’ve followed the QMAs in the past, Luke Daniel Peacock is probably a familiar name.  He carved himself a reputation for raw authenticity and excellent songwriting back in 2016, when he released his debut album, We’ve Come A Long Way Darling.  ‘Fruits of Our Labour’ won the Indigenous category at the QMAs that year, and Peacock was awarded the prestigious Billy Thorpe Scholarship.

Now, four years on, he’s stepped into the ring with ‘Older Then’, an indie single with background vocals from Ayla, a fellow Billy Thorpe winner.  It’s polished soft rock, a melancholic tangle of ambiguity that somehow elicits both nostalgia and hope.  You can listen to it on YouTube here.

Busby Marou are a heavy-hitting Aussie duo who started recording as early as 2007, and their experience is evident in the effortlessly catchy quality of their latest hit, ‘Naba Norem (The Reef Song)’, from The Great Divide.

I should mention that Busby Marou aren’t just finalists for the Indigenous category – another song, ‘Lucky Stars’, was nominated for Pop, while ‘Naba Norem’ was also nominated for the Blues/Roots and Regional categories.  The song vibrates with the culture and environment of the Torres Strait; the chorus, ‘taba naba naba norem’, means ‘come on, let’s go to the reef’ in Meriam Mir, a TSI language.  Check it out here.

Project 62 are a six-man band from Toowoomba, with lead singer Jason Lawler’s powerful vocals backed by growling guitars and the meaty thump of Adam Henry’s bass.  ‘Ancient Valleys’ is a rousing call-to-arms – the song preaches a return to the land, a return to connection with the ancient valleys of Australia.

It’s unusual for a music video to match the quality of the song in question, but I’d definitely recommend checking out the clip for ‘Ancient Valleys’.  It was filmed in the Bunya Mountains, the perfect complement to a message about embracing your roots.

I’ve saved ‘Arrived’ by Mau Power for last, because I was lucky enough to speak to the man himself – Mau Power, arguably the biggest TSI hip-hop artist, founder of production company One Blood Hidden Image and a cultural icon in Far North Queensland.

Aussie rap seems to fall into two categories – the broadly-appealing hip-hop of musicians like Bliss n Eso, Hilltop Hoods and 360, and the darker gangsta rap of artists like Nter, Fortay and Hooligan Hefs.  Mau Power is a step away from both.

Who is Mau Power?

The first thing I’m struck by is that Mau is incredibly humble.  When I congratulate him on being nominated for the QMAs, there’s no braggadocio, affected accents or American slang – he just thanks me and tells me how honoured he is.  Unusual, in a music culture that has an entire sub-genre called ‘brag rap’.

Mau’s first interaction with that culture came when he was very young – a childhood on Horn Island (part of the Torres Strait) at that time meant beat-boxing, breakdancing and b-boying, and soon he and his friends were rapping as they roamed the streets of their home town.  His uncle playing a cassette of New York hip-hop trio De La Soul’s ‘Ring Ring Ring’ is his first conscious memory of rap, but what started as a casual hobby quickly evolved into a life-long career.

He cites rap legends like Nas, Tupac and Biggie as inspiration, and their influence is visible in his works.  Not in terms of content – there’s no depictions of gang violence and drug dealing in ‘Arrived’ – but in the lyrical storytelling and the old-school flow.

It’s here that hip-hop and Indigenous culture meet, the deeply personal nature of rap mingling with traditional storytelling.  The advent of modern sub-genres like trap and drill have relegated more lyrics-focused rap to the back seat, but Mau seems intent on reclaiming the steering wheel. 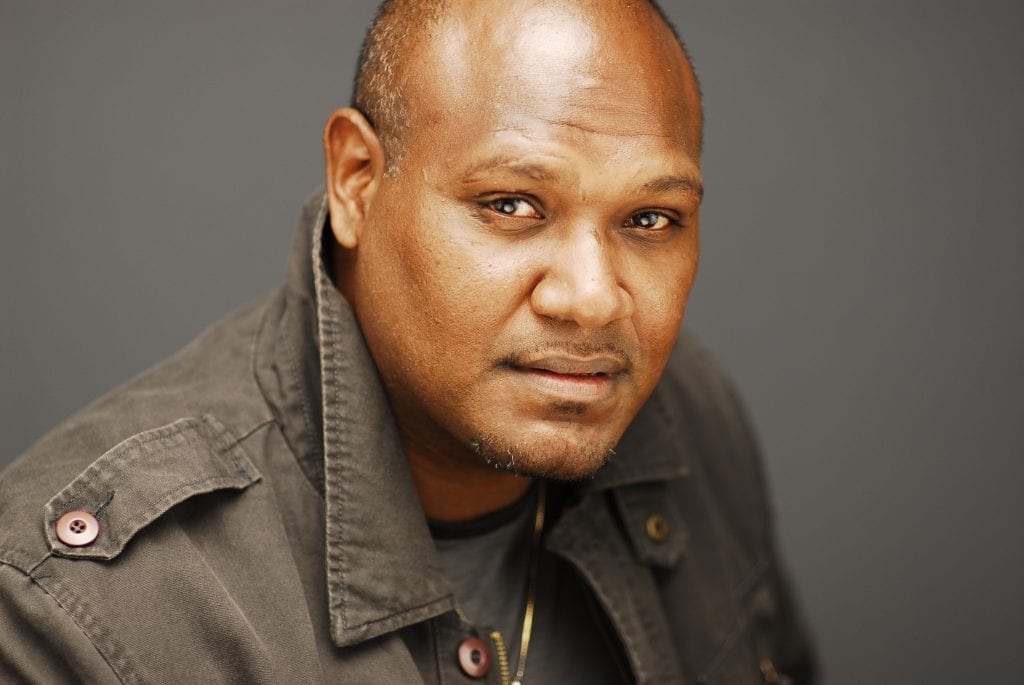 When I ask him about the story behind ‘Arrived’, he tells me that it’s “the realisation that coming to a point where you have arrived, where the moment you were waiting for is so close that you can see it”.  If you haven’t heard it, I advise you to take a listen – you can watch the music video on his YouTube channel here.

Fellow TSI artist Marcus Corowa backs up the track with soulful vocals that lend ‘Arrived’ a distinctly spiritual feel, and there’s definitely a sense of transformation there, a movement from one place to another, more hopeful one.

I ask Mau if there were any specific events that sparked the writing.  It turns out that when he promoted a single from his first album, The Show Will Go On, only a handful of people turned up to the club to hear him rap.  By the time he finished the tour circuit, he’d attracted a crowd that numbered over ten thousand strong.

That same single, ‘Island Home’, was the opening performance at the 2018 Commonwealth Games on the Gold Coast.  “When I wrote that song, it was almost like speaking into existence that this is where I want to be,” Mau says.  “And I have arrived at the point that I’m supposed to be.”

From the streets of Horn Island to carrying the torch of Australian culture at the Commonwealth Games – it’s a pretty impressive journey, and the QMA nomination is another notch in Mau’s belt. He attributes his success to the universality of his lyrics.  They’re about the personal, but they reflect the relatable, which is arguably the secret to all good music.

People find there’s something in the music that they can relate to.  We’re all on a journey of growth.  Everyday we’re growing, we’re learning, we’re trying to better ourselves and become better people.

For Mau, writing and rapping about that journey is therapeutic, but, for many of his listeners, it’s equally cathartic.  His unique fusion of hip-hop and Indigenous culture have turned him into a trailblazing icon, a cultural ambassador for the Torres Strait.  His production company, One Blood Hidden Image (OBHI), is named after a rap group consisting of him and three friends that was formed in 2004.

The original OBHI has long since dissolved, but its modern incarnation is bringing employment opportunities to the Torres Strait, as well as a chance for TSI artists to share their stories.  Mau says he loves collaborations, particularly with other Torres Strait creators. “An artist can bring their own essence and make [that song] their own.  That’s what Marcus [Corowa] did [in ‘Arrived’], and wouldn’t have come out the way it did if it wasn’t for his contribution to it”.

Where Next for Mau? 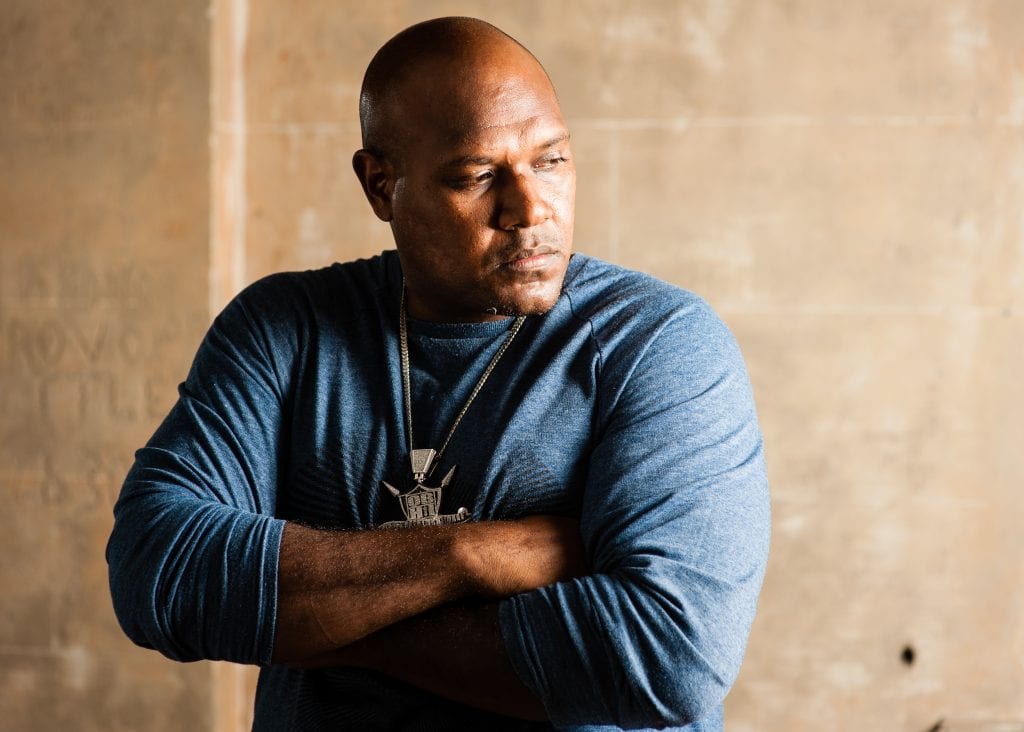 Mau is currently based on Thursday Island, but he’s flown down to Brisbane for the QMAs.  I ask him what’s next on the agenda once the awards are finalised.  He tells me he’s going to focus on promoting Blue Lotus: The Awakening (the album that spawned ‘Arrived’), as well as working on his next album, which he hopes to release by the end of the year.

He’s also involved in a number of documentary projects via OBHI, which are destined for national channels like SBS and NITV.  He urges readers to check them out.  “Have a watch, have a listen, engage with it and see if you connect with it”.  I couldn’t agree more.  The QMAs are about celebrating artists like Mau Power, and bringing their work into the national spotlight.  There’s a need for these stories, these homegrown tales that span our state from the beaches of the Torres Strait to the suburbs of Brisbane, and it’s vital that we support the people that create them.

So here’s my third challenge to you: go back to the QMAs finalists page.  Pick four artists you’ve never listened to before reading this.  Add them to your Spotify playlist.  And next time you’re thinking about putting on Thomas Rhett or Taylor Swift or The Game, play one of their songs instead.

The Queensland Music Awards are held in the Fortitude Valley Music Hall on 3 March at 6pm.  Get your tickets here.

The Top Ways to Spend 4 Nights in Surabaya

Enter your details below to become a Wyndham Holiday Pass member.